Traditional Indian weddings span a few days, and involve many intricate rituals, such as the painting of the hands and feet of the bride called a mehndi. Instead of corsages, garlands are worn by important guests and lots of flower or rose petals are scattered for good luck. 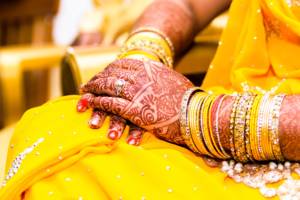 The wedding is divided into three parts: pre-wedding, main, and post-wedding. The pre-wedding includes all the arrangements and a party the night before where each side of the family can meet each other and dance and enjoy the night. A Pandit, who has selected the day of the wedding based on the bride and groom’s horoscopes, conducts a prayer with family members to provide the couple with a happily married life.

The wedding altar (mandapa) is built the day of wedding.  The groom is welcomed by his future mother in law where his feet are then washed and he is offered milk and honey. His sister in law will attempt to pilfer his shoes and if she is successful, the groom must pay her to get them back. An Indian groom normally wears a turban with a veil of flowers to protect him from evil spirits. 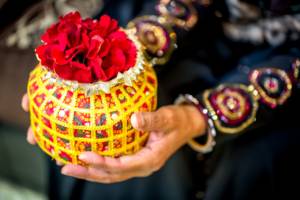 The parents give the bride away, but they do not eat before the wedding to remain pure for the occasion. The bride’s saree is tied to the groom’s scarf to symbolize the union of the souls. During a comparable ceremony, a cord is tied around the couple’s necks to protect them from evil; the seniors of the bride and groom normally tie them together.

Instead of exchanging rings, a MangalaSutra is tied around the bride’s neck. The mangala sutra is a cord with two gold pendants, and is tied in three knots by the groom to symbolize the connection of the two souls for 100 years.  Also this necklace is a symbol to let others know that the bride is married.

One entertaining ceremony is called mangal pheras. This is when the bride and groom loop the sacred fire four times to represent dharma, artha, kama, and moksha and then they run to their seats.  Whoever arrives first gets to rule the household. 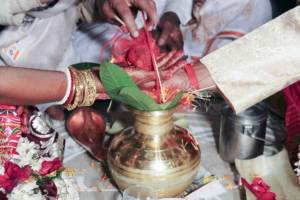 In Saptapadi, the groom helps the bride touch seven betel nutes with her right toe during which time they recount seven vows. Afterwards, seven married women from the bride’s family pass by the couple and whisper blessings in the bride’s right ear. When the wedding finishes, the bride is carried out by her brothers.

The bride then leaves for the groom’s home where her mother-in-law has placed a vessel filled with rice at the entrance of the home. The bride is supposed to spill the rice by touching it with her right foot to signify good fortune and that the bride accepts her new obligations.

Another fun game for the newlyweds is called Aeki Beki where a tray of water is mixed with milk and sindoor(vermillion) and it is filled with coins and a ring. Whoever finds the ring four out of seven times will rule the household. The day concludes with prayers to God requesting happiness and love for the newlyweds.